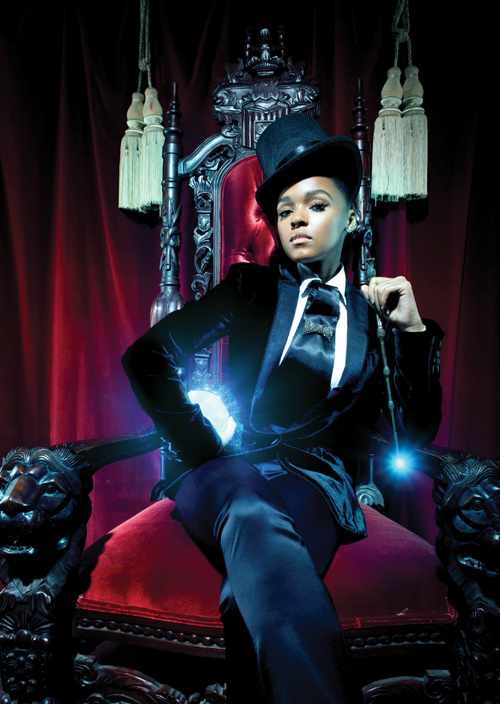 Janelle Monáe is back and she is not playing games with y’all!

It’s been almost five years since the queen of futuristic R&B has donned her crown and dropped an album.  Not that she hasn’t been busy in the intervening time.  She starred in movies, founded a label, honed her production chops, slayed red carpets, and been an activist.  Of course, going out and living her life outside the confines of a study and a touring schedule means that she has had some new experiences to build her new project as well as grow as an artists.

The first track, Make Me Feel, immediately got us in the vibe of Prince.  The production and rhythm of the track are very much an homage to Kiss and the feel of that video is leaking all over the visual as a whole.  But, once she starts singing, the Prince connection is brought in full force.   She manages to merge her own unique tone with that of the Royal Purple One for a track that has a lot of soul and is a lot of fun from start to finish.  And, other than the she she casually slips into the first verse, it can be hard to figure out exactly who this song is aimed at…which was the point.  The lyrics are powerful and are a statement of enjoying your own sexuality and sexual feelings in a way that makes leaves you in control of where you want things to go and not at the mercy of the hang ups of others.

The second track, Django Jane, has her stepping right up out of Wakanda and putting some bars on wax.  There is a lot of pride in this track, both in terms of her accomplishments as an individual but also what her making the right steps means for the culture at large.  The production is interesting.  It comes in and stays a lot more mellow than you would think given the context of the lyrics, but that kind of makes the track work all the more.  It makes it more a statement of facts that can’t be denied than an aggressive argument looking for validation.  The structure of the flow itself is reading a little Jidenna to us and, we suspect, he probably had more than a little to do with the writing of this one.  This kind of subject is right in his wheelhouse as tracks like Chief Don’t Run and Long Live The Chief follow the same theme.  Still, Monáe delivers the lines with confidence and strength, more than making the track her own.  As much as we love the first, this one is probably our favorite of the two.

But the sound isn’t even the start of this comeback.

The first thing that you are going to notice the most about these visuals is that Monáe has dropped her black and white.  There is something about her, something that isn’t new, that has decided she is going to be free this time around and we are loving it.  She still has her suits (and looks amazing in them), but she is going in for full spectrum this time and it has colored the attitude she seems to be giving us and it feels like a complete picture of a woman who has come into her own and has decided own that fact.

The second thing you will notice is that, despite the wardrobe and hair changes, these videos still fit in very much with the aesthetic that we have gotten from her in the past.  There are Afro-futuristic elements, feminist elements, LGBTQ+ elements, and symbols of conformity versus individuality everywhere.  This really just seems like the evolution of a dope artist and not someone who is grasping onto trends and letting them overwhelm her.

If you got a chance to see her album trailer either on YouTube or before Black Panther at the theaters, you know there is good chance that this might be a visual project as well as an auditory one.  We certainly hope so as there seems like an interesting story being told and we would love to see it all.

Dirty Computer is expected to drop on April 27.  You can pre-order the album now.