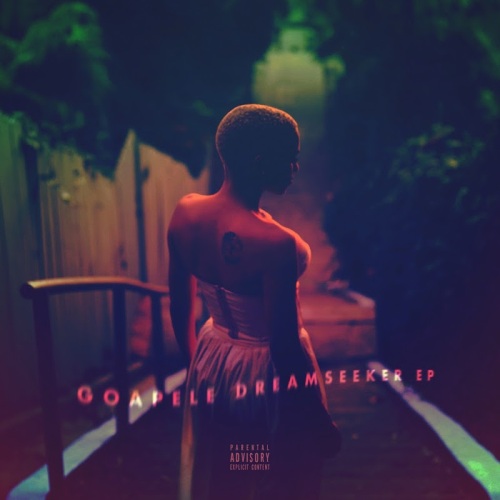 Goapele has always been one of those artists that is never at the forefront of the mind, but everyone has a song by her that they love.  Whether it’s her debut single, Closer, with its biographical assurances; the playful First Love with its happy, relatable illusions to falling in love all over again; or the sexy Play that showed that soulful beauties can be sensual goddesses, too; she always gives you one on every project.  She has always seemed to grow as an artist and her music, while always changing and improving, seemed to have a consistent core that made it identifiable as hers.

So it surprised us that, when promoting Dreamseeker, the songstress said that she was using this project to “get back to [her] roots.”  We wondered if the maturity that we had seen her develop over the years would disappear in favor of a more youthful concept.  The first few singles set our minds at ease, but we knew the only way to truly find out what she had in store was to wait and listen.

1. Dreamseeker (Intro) – If this were a full song, this intro might have been a misstep because of the slow tempo and ethereal sound, but it works with its short length.  The gentle feeling that washes over you as you start listening is warm and lulls you into a sense of security.  It isn’t until about 40 seconds in that we hear Goapele for the first time with a single note that rises our of the gentle mists of the music like and angel.  Repeating the refrain I’m a lover, I’m a dreamer/I’m a hider, I’m a seeker (which sounds like a modification of the chorus of The Joker), she seems to be telling us what aspects of herself she will be revealing most on this EP.  As you listen to the production, you begin to notice more elements being added as it progresses, making for a ramp up in emotion without changing any of the core aspects of the song.  It gets you interested in what’s coming next.

2. $ecret – All about Goapele sharing her freaky secret, the vocals on this are strength and sex appeal of the track.  The delivery is sexy and confident, which is perfect for a song that doesn’t have her begging for love as much offering it to someone who she wants and is willing to meet the conditions she lays out.  The production is amazingly lowkey considering what’s going on in it.  There is a rolling snare, a mid-tempo bassline, and a slow, almost eerie overarching melody.  You wouldn’t think these things would go together well, but Goapele’s vocals helps join them and, even on their own, they coalesce into a nice sound.  The lyrics are poetic without being obtuse, which is good for a babymaker.  As the first full song you hear, it sets an interesting pace for the rest of the project, but it does escalate things from the intro and is not so laid back that the listener will tune out.

3. Bright As The Sun (Interlude) – You would think that this track would pick up the tempo a little bit to match the slightly faster pace of the next track, but it keeps things on a somewhat even keel with $ecret.  What bridges the two tracks is the confluence of sound.  There is an overall jazz feel to this, with its interlinking harmonies and lowkey Spanish guitar, but with a boom bap beat that adds some nice thump to things.  You can also hear the same tribal drums that you hear on Power, just slower and less pronounced.  Goapele repeating the first line of the chorus to Power sets a good tone for what’s to come without giving anything away to those who didn’t hear the single before.

4. Power – The production on this track with its African rhythms, sizzling bassline, and tinkling, sweetheart melody are different for her.  It’s part African dance, part lullaby and it works wonderfully well.  The lyrics, about receiving and reciprocating unconditional love, are poetic in style but not so bogged down in themselves that the listener gets lost in the possibilities of meaning.  The lines are a good mixture of simple meaning with powerful imagery; a great way to describe looking into the eyes of a child and seeing all the possibilities that lay ahead of them.  The deeper, soothing tone of Goapele’s voice is a beautiful offset to the beat.  The interesting thing is that there is a lot of power in her tone but the overall delivery of the performance is still very understated.  A standout track.

5. Take It Over – From the way that Goapele delivers the lyrics to the way the synth and EDM beat overlay with the Sweetest Taboo-like snare, tambourine, and hi-hat on the chorus, there is something just a little bit eighties about this track.  There is also more of that tribal element that makes this link well with the previous track.  The way the singer just coolly delivers her vocals is great match for the energetic but subtle melody.  It’s an interesting contrast with the theme as well.  As she sings about how this man makes her feel like she’s out of control at times, she sounds accepting of the feeling, like it’s something you should expect and look forward to.  It comes off as sounding mature; not so youthful that she’s in love with love, but not jaded and blasé about it either.  A strong track.

6. Giving Me Life (Interlude) – It can take a few listens to hear how this interlude joins the songs it comes between.  Repeating a few lines from the bridge of the previous track, Goapele uses a slightly sped up, somewhat Caribbean version of the production of Stay as the beatwork for this.  The interludes are nice but the realization that this EP is now more than half over and there have only been three full songs so far does make you questions the necessity of them beyond functioning as transitions.

7. Stay – Featuring BJ The Chicago Kid, the nature of this duet seems a little off at first; the two singers don’t really share any musical space together for the first verse.  That separation makes a little more sense as you hear Goapele describe herself as a person who has a hard time admitting her emotions.  After she opens up and he reciprocates, it starts to sound like a conversation; an interesting take on the track and ends up working very well as the emotion builds as the song proceeds.  The Chicago Kid’s soulful street voice and Goapele’s elegantly powerful voice mesh well from harmonies to adlibs and they each incorporate elements of the other’s style as they sing, playing to theme and making the song feel like a union.  Definitely worth a few listens.

8. Full Circle (Interlude) – Another interlude and, as nice as it is, we’re really glad there are over.  On this one, Goapele speaks to us about her questioning what she wants out of life and her career at this point.  It’s an interesting moment that lets you see inside the artist’s head and also serves to set up the premise of the next song.  There is also the feeling that these interludes might be serving as those moments in live show when the band plays a little something and the performer either speaks to the audience or sets up for the next full number; like this is what you would hear if you saw her live.

9. Stand – This is probably the most sonically distinct track of the set as the jazz and tribal elements fall away for something that is a little more pop&B.  The beat escalation on the second verse is a nice touch and is a nice respite from the more mellow songs that have populated the bulk of the project.  This is a nice track about being about more than self and the placing the value of living on more than what you the zeros on a paycheck.  Goapele’s vocals are at their most powerful here, as she rings out strong against the beatwork in a way that she hadn’t on the songs before.  It conveys a sense of confidence in the advice she’s giving the listener as well as making you really tune in to what she is saying.  The biggest downside of this track is the lyrical composition, which falls more into platitudes as the songs goes forward.  While this is certainly worth a few listens, the cliché nature of the writing makes it somewhat forgettable.

10. Cool Breeze – The sexy, bluesy, electric guitar intro is a killer from the moment things get started and had us thinking a little of Teena Marie, just slower.  This another track where the songstress’ voice really shines.  She has a laidback air to her tone, but there is a sultriness that simmers just below the surface, setting a mood.  The harmonies add something lush to the already full instrumental, making the emotion was over the listener like tidal wave.  The lyrics here are solid, equating the feeling of love and self-satisfaction coming over you to that of a breeze that makes the temperature just right when things get too hot.  The metaphor makes sense and is an interesting take on the feeling that you don’t hear very often.  A standout track.

We can’t say that this EP left us feeling completely satisfied.  Most of the reason for that disappointment is the brevity of the entire thing; only two songs clock in at over three and a half minutes, which leaves several of the tracks feeling somewhat truncated.  The interludes don’t help the feeling and feel tacked on to extend the runtime.  With the exception of Full Circle, which describes the inspiration behind the creation of the set, there really isn’t a need the other asides and the project might have been better served without then.

We do understand what she meant by getting back to the basics of who she is, though.  There is also a renewed energy in her voice, which may come from the freedom of independent music making and doing what she wants, at that feeling elevates the project.  There is an excitement to even her most toned down tracks that makes them feel like they come from her soul.  The writing, while sometime hit-or-miss, still conveys that maturity that we have come to love from her but with the youthful exuberance of someone who knows what the road ahead contains and is ready to face it all with ferocity and grace.

Ultimately, though, this is still a pretty good project from Goapele.  Her soulfulness shines through on every track and the production, while mid-tempo for the most of it, still provides enough of a kick to interest you when you are in a more upbeat mood and leaves you feeling good.   There is enough variety of sound to keep you invested and listening, but enough cohesion between the tracks to make things feel like this was not thrown together willy-nilly with no forethought.  While we feel like this could have been expanded further, this serves as a teasing snack until we can get something a little more substantive from her.