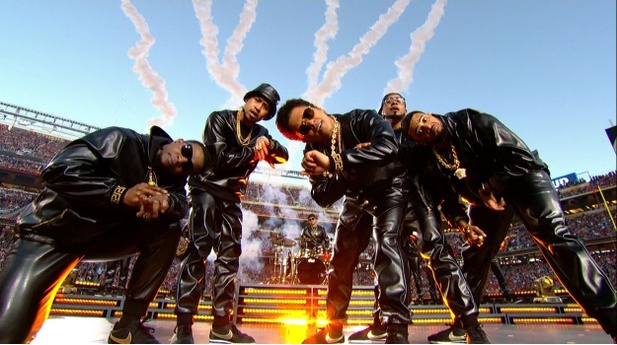 It’s been four years since Bruno Mars had the world grooving to his Unorthodox Jukebox and, despite having the biggest song of 2014 to his name, fans have been eager to see what to artist would be coming with for his next full-length project.  It’s clear, with the release of his new single, that what we’re going to get is the singer feeling himself a little!

Starting off with that Roger Troutman talkbox over a sexy eighties beat, the track quickly transitions into bouncy eighties groove that will remind fans a little of the funk of Treasure except…Bruno got them bars!  Don’t expect to much singing in the verses (with the exception of the background harmonies) but it works well as the lyrics are just the right tone for the kind of old-school flow he brings.  And the lyrics really do shine on this track as they have a lot of over-the-top personality without leaving the listener feeling like rolling their eyes at them.  It’s clear that this is one of those tracks that is meant for a party or a night out with your best friends.

Now, we are aware of how extremely close in theme this is to Uptown Funk but, as long as we don’t get an album full of this, we are more than willing to take this fly-ass player’s anthem.

This is the first single from Mars’ upcoming album of the same name due out November 18.